The Importance of Sumps

It is not uncommon for the term “Sumps” and “CatchBasin” being used as interchangeable terms. The pictures below show a picture of a catch Basin in a yard in front of house. In this case the Catch Basin needed was cleaned and  a cap put on top. This raised the catch basom for easy future access.

The second picture is a drawing showing how water from your eaves for example would enter the catch basin. The water will sit on the bottom and the silt will go to the bottom. The water raises to the outflow pipe the outflow will flow, in this case, to the city drainage system.

One common example of a sump is the lowest point in a basement, into which flows water that seeps in from outside. If this is a regular problem, a sump pump that moves the water outside of the house may be used. 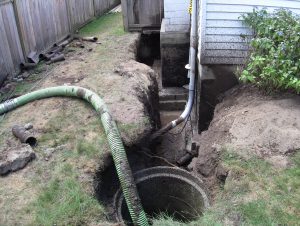 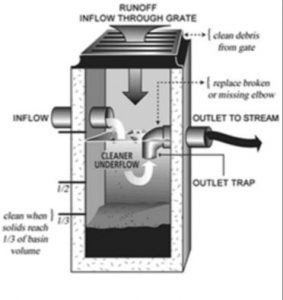 Drawing of Sumps or Catch Basin

What is a Sump Pump?

In some situtations a house may have a very high water table or an indoor trench system has been installed. In these situations it may be a good idea to have a sump pump. The water ingress could be at times of heavy rains, or in the spring if the house in a area of heavy snow and spring melts. Whatever the case their are times when a sump pump is part of your foundation management system.

What is a sump pump

A sump pump will have two main parts. These two parts will be a float switch and an acutual mechanical pump. The two parts are placed inside a sump pit. The sump pit will be placed at the lowest level in the basement area. As water leaks into the basement it is channeled towards the sump pit. AS the water level rises inside the pit it will eventually lift the float switch. when the point gets hig enough the pump will start and the water is pumped out of the basement and channeled away from the houlse. h

Why A Vacuum Truck?

Why Did We Buy A Vacuum Truck?